How’s the Weather in Your Head? 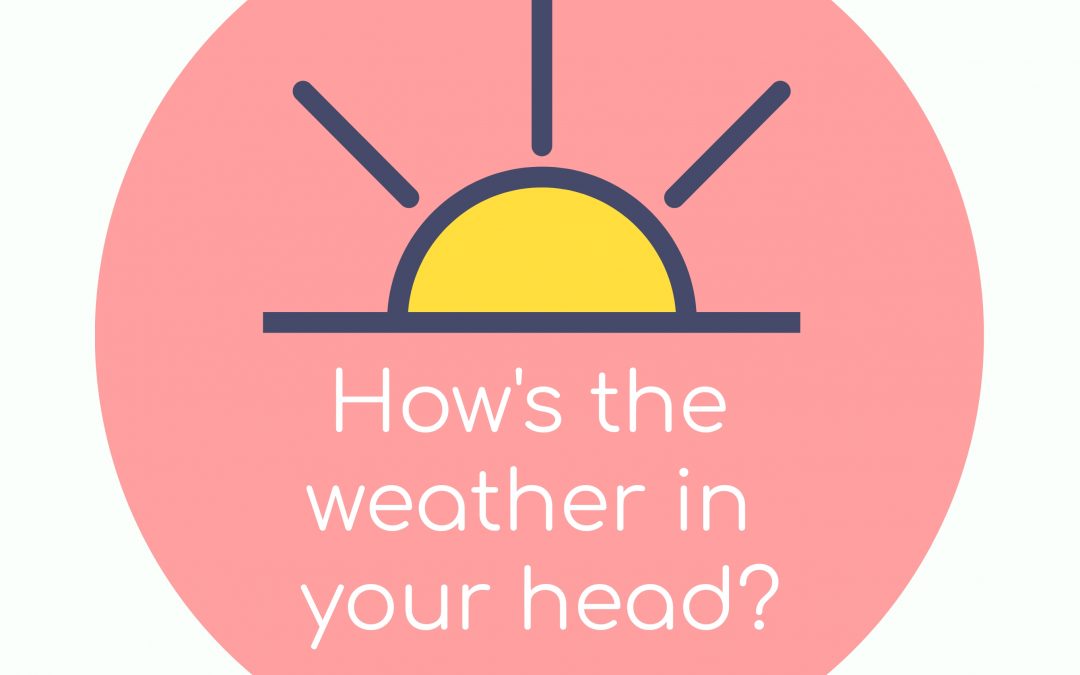 During the Summer break, teachers across the country are going to be watching the news and worrying about the structure of future teaching. In September, will they be teaching thirty children at a time or ten children at a time? Will schools even be open in September? Will the children all be from the same year group? What kind of resources will be allowed in schools? The endless list of uncertainty is causing considerable anxiety and stress to teachers everywhere and I think there needs to be a bigger discussion about this.

A solution could be language. Phrases we use everyday.

During lockdown, I’ve noticed that the question ‘how are you?’ has allowed people to actually consider how they are doing rather than giving the expected ‘Good thanks, you?’ that usually follows. This break in normality almost gives us permission to open up a bit more to the possibility that we’re not okay at the minute. As the person asking the question, we’re also more likely to listen to the response. It feels like because we’re all in the same boat, we have a deeper level of understanding and are interested in how others are tackling this same break in normality. It has been refreshing. As someone who runs a business working very practically in primary schools, my last few months have been very different to what was planned.

As the lockdown eases, it would be easy to go back to giving the expected ‘good thanks, you?’ to questions about how we’re doing. I would urge as many people as possible to remain open to the idea that we’re not okay and we shouldn’t be ashamed to admit it. Just because we aren’t on the front line with the health care professionals, we shouldn’t suffer in silence. There is a responsibility to reform some kind of structure and comfort to children and young people as they return to classrooms. So let’s talk about it, whether it’s practical ideas about how to keep spaces clean and safe or whether we just need to chat through our worries or concerns about the environment we’re returning to.

So how do we use language to combat and address these issues?

‘You okay?’, ‘Y’alright?’ and ‘How are you?’ have somewhat lost their meaning. Unless somebody says it very carefully and sincerely, it might seem odd to open up about what’s going on in your life. Particularly in men, it’s easy to just brush the question aside even if the person asking it is genuinely interested or concerned. Obviously, I’m not suggesting that we go into detail about every aspect of our mental health with every neighbour or member of supermarket check-out staff we encounter, but I have noticed a solution which is so simple, but effective.

On BBC Radio 5 Live, two comedians host a show on Fridays. Their names are Elis and John. They also host a podcast called ‘How Do You Cope?’ where they interview creative people and speak very candidly about traumatic and challenging times from their past, from divorces to deaths and terminal illnesses. It’s very human and honest and emotional. It feels cathartic for the guests and as the title suggests, encourages them to consider what it was that helped them cope with their situation. It’s excellent and I highly recommend listening to it, but one of the most profound things I heard from that show was in a short conversation between the two hosts. They explain that they don’t ask each other ‘how are you?’ if they really want to know about their friends’ mental health, they instead ask ‘how’s your shame?’ to indicate that they want a deeper answer and don’t want it to be brushed aside.

Similarly, in Adam Buxton’s podcast, when talking to his close friends he will use phrases like ‘how’s the weather in your head right now?’ Both of these examples can sound quite childish, but it assures the person being asked that they are genuinely interested in how they feel.

At this peak of anxiety and stress, I think it’s important to check in on each other, and these slightly quirky questions are a good remedy to ensure that people don’t dodge the questions and bottle everything inside.

People have missed weddings, lost family members, jobs, opportunities, relationships and all sorts of other things which they may need to talk about but haven’t had the opportunity.

Now is the chance to be very conscious and deliberate in our language to encourage these conversations and build a supportive community for children across the UK.

That also means that you need to be open to talking about the weather inside your head too and admit when things become too much.

If you want to talk about the weather in your head, send an email to tom.cable@bluekazoo.co.uk.